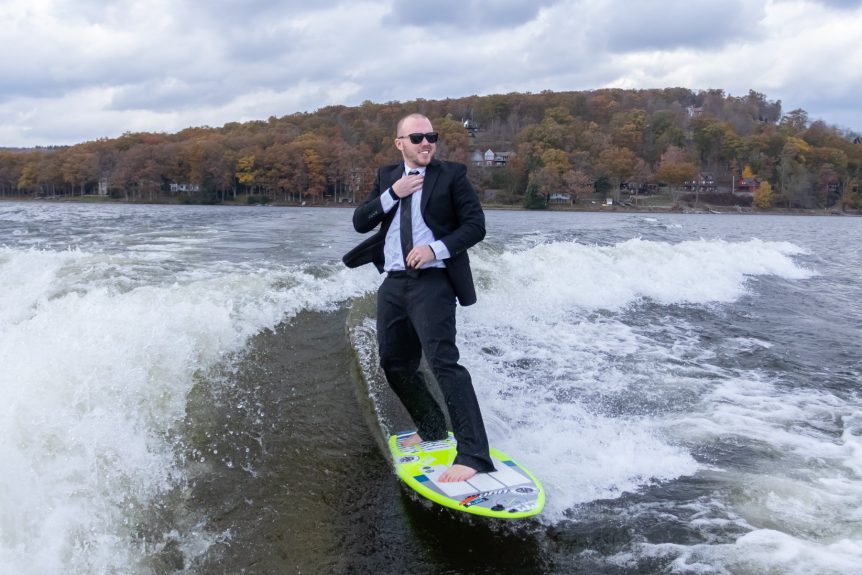 I turned 29 four months ago. Writing that just now felt weird. I guess it’s hard to realize how fast time moves once you’re an “adult.” Lately – for some reason I’ve been looking back at my 20’s and thinking to myself “what in the absolute hell have I been doing for the last 9 years.”

When I graduated college I thought I had it figured out, I was going to take my economics degree and take over the world. I was going to start at an entry level analyst position… work my way up, and by the time I was 35 I’d be one of those cool young guys at an executive level position with a cool modern condo in the city, driving my Range Rover to my hip office job, and wear expensive suits. I would go home every night to a girlfriend (because I was never getting married) who had everything in common with me and adored me because I was just so damn cool and made so much money (way more than she did)

Well, guess what? Here we are 7 years later – I live a few hundred yards from a lake — in the middle of the woods. That hip modern condo I imagined is actually a log house built in 1983. I drive a Tacoma that sort of looks like a desert race buggy, and my wardrobe – by my estimation is 94% t-shirts… the other 6% is flannels because it gets cold here. My  wife has a doctorate degree, makes twice as much as I do, and literally spends everyday saving lives. AND we’re almost polar opposites –

and in case you didn’t catch that — we’ve been together for almost 9 years and have been married for almost four of those. If you were to go back in time and tell 2011 Logan this is what his life would look like, he would probably laugh in your face. I was always so focused on what people “think” success looks like.

When I lost my first real job and started my first businesses I was wide eyed and ready to take on the world. I came from a normal middle class family. No one in my family owned a business, no one was rich, and I had absolutely no safety net. I had never been exposed to actual entrepreneurship. In all honesty I had no idea what I was doing, I just knew that I wanted to do something I loved. I ended up learning pretty much everything the hard way. I made a lot of mistakes… more than most people realize. Still to this day I’ve never had a mentor… I’ve never even had a fellow business person to just bounce ideas off of or ask for advice.

My wife graduated a top 10 nurse practitioner program with a 4.0 when she was 25 years old.
My wife’s family owns a successful business.
Most of my in-laws close friends also own successful businesses.
Most of their kids have prestigious “real” jobs — You know, those types of jobs that their parents love telling the other parents about.

So, I want you to imagine what it was like to hear someone in those groups ask “What does Heather’s husband do?”

It’s moments like those that will scare you back into what everyone wants you to believe success looks like. It’s those moments that scared me into telling anyone about the behind the scenes of my business. It also was the main reason I never asked for help, and was embarrassed to ever admit when things weren’t going perfect. I’ve never liked asking for help or relying on anyone, but in business it bothers me even more.

I won my first big contract to film a video with less than $100 in my business account. Instead of embarrassing myself and telling my wife (gf at the time) or anyone else that I couldn’t afford to get a hotel room – I slept in my truck in a slightly sketchy parking lot the night before that shoot and got ready in the morning via a free day pass to planet fitness and their showers. I actually am not ashamed to admit in the first year of business I did that 3 times. Thanks Planet Fitness *not sponsored*

At the time I was so afraid of hearing someone say “I told you that business wouldn’t work” or telling me I should have just gotten a “real job” that I decided a sketchy Wal-Mart parking lot was a better option. I actually had never even told my wife about any of that until about a year ago – I’m sure you can imagine how happy she was with my decisions.

I’ve always hid a lot of the reality of what starting a business was actually like because I was afraid of the perception it would give. I was afraid potential clients would see a post like this and think they couldn’t work with someone like me. But after almost 6 years I look back at those early days and realize how lucky I am to be where I am today. I have worked with so many clients in so many places and industries and can honestly say that the majority of them would read a post like this and think no differently of me than they did before.

My favorite Ted Talk of all-time was by my favorite business author, Simon Sinek. He talks about the why.

“People don’t buy what you do, they buy why you do it.”

I can honestly say that’s the truth. I have had more than one client say they picked me because my portfolio and client list was good, my work was good, and they looked at my website/social media and appreciated that I was more focused on explaining why I loved filming and my job than trying to sell someone on filming their video.

Never stop being weird
Never stop creating
and never let someone tell you that you can’t do something.