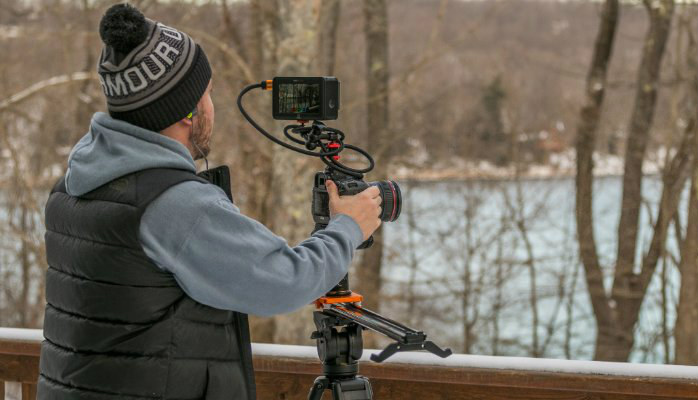 We live in an age of lightning fast internet and people who are literally always connected. Seriously, look up from your own phone the next time you’re in a restaurant and you can almost always count the number of people actually talking to each other on one hand. While that is somewhat depressing — when viewed as a business owner it’s a gold mine. Now before you tell me my generation is ruining America and that we killed communication — allow me to explain.

I shoot commercial video and photography for businesses, so I’ve taken a special interest into how I can get that content in front of potential customers. The first notable change that I have yet to see many businesses take advantage of is Facebook video. Don’t get me wrong I love YouTube and Vimeo but people aren’t constantly scrolling on either of those apps. Here’s my favorite things about Facebook Video and why you should start using it:

The days of photos being the best way to reach followers aren’t gone, but they definitely shouldn’t be at the top of a marketing campaign. Photo posts on average are half as likely to be seen. Do I think people should give up on posting photos? ABSOLUTELY NOT. I just think that it is more beneficial to you business to be more selective and picking only photos that are captivating and will stand out to the audience you’re after. People don’t need to see a poorly lit iPhone photo every day.

2. Call-to-Action (CTA) – All of us have been on YouTube and watched videos that have the pop up annotations that lead to other videos, websites, and more. However, they are pretty annoying and distracting — I’ve only clicked on a few in the thousands of videos I’ve watched. That’s where Facebook video has a YUUUGE (Donald Trump Voice) advantage. At the end of a video Facebook allows you to put a call-to-action button. I absolutely love the flexibility and how simple it is. This way you can easily and simply set a marketing strategy for each video. Set a goal for each video and where you would like to send traffic. A great example is when I shoot real estate videos. I approach these videos much differently than most. I avoid the typical pan of each room using a wide angle lens trying to make every room look big. My goal is to grab someones attention and show the “vibe” of the home. I show just enough to keep them interested and then use the CTA button to send them to the full listing page. That’s where they can find the photos of every room and see every single feature of the house.

3. Users – So I’ll share a stat with you that is pretty powerful. There are six billion people on the entire planet. 1.55 billion of them are active on Facebook. That’s right as of the third quarter of last year (2015) Facebook surpassed 1 billion users. Also, to keep the stat train rolling Facebook is also the 2nd most visited site in the world. They are just behind Google and ahead of YouTube. Here’s the whole list of 500 if that’s interesting to you (Top 500) More than likely, none of that shocked you — but it is amazing to me when you see the vast ocean of potential that is social media. Smallbiztrends had a bigger list of bullets points that really helped reiterate my points. Here’s a couple of the more important ones for the sake of my post:

The last bullet brings me to my next and final point.

4. Auto Play – Facebook has something YouTube could never accomplish. It’s basically a system that forces people to watch videos. Now, before everyone reads this and says “Hey stupid! you know you can turn that off, right?” Yes, I do know that, but according to a few studies most people leave it on. To be exact the only study I could find was from early 2015 and the poll read like this:

And for my OCD friends, yes that is only 99.9% (I’m assuming someone in this group was an economist and rounded. You have to remember we’re economists and have successfully predicted 9 out of the last 4 recessions.)

My point of that rambling was that 66.7% of users still auto play videos. While they don’t auto play sound the fact that a user has to scroll past a in progress video is a good start. This is especially important for someone like myself because it shows me how to structure videos in hopes of luring a viewer. There is also lots of data on the length a video should be for the most success, but I’ll save that for a later post. I’ll leave it here for now and hope this was helpful to someone. As always, if you’re business (big or small) is looking for someone to help manage or create media content all of us at Marks Media are always ready for a new project.